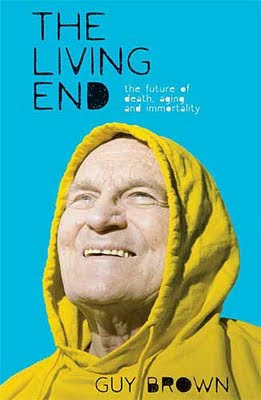 Dr. Guy Brown, a self-described 'research scientist working on the molecular mechanisms of cell death and degenerative disease...', has written a fascinating study on the history of death. Particularly, on human death and the diseases that precede it. Up until the advent of modern medicine, death was generally a swift affair, often striking with little warning and offering little hope in the way of reversal or postponement. To put it bluntly, until fairly recently people dropped like flies, and there wasn't much anybody could do about it.

Not so these days. Through the miracle of medical intervention a person whose physically degenerated condition would have doomed him to a mere few weeks or months of continued life, can now often be expected to linger on for years or even decades. This might seem like a good thing to the existential bean-counters amongst us, where all that ultimately matters is how high the final score's numbers can be ratcheted up. But to those under the care of the life extension community it can be hell on earth, trapped in various forms of decrepitude for an average of what's grown to be 10 years in the developed world. That average continues to grow.

Alzheimer's, vascular disease, organ failure and a host of other maladies are slowly losing their unique status, merging under the emblem of what's fast becoming a universal affliction- old age. This trend is what Dr. Brown addresses in the book. He's a talented, descriptive writer with seemingly a lot of expertise on the subject, and he's good at weaving detail into a medical-historical narrative that leads us up to where we are today. He also addresses the philosophical issues behind our attempts to stave off the Grim Reaper, including a nice chunk of the end of the book addressing the transhumanist agenda, of which he is rather quizzically pessimistic. Well, maybe not so much pessimistic as simply quizzical- you be the judge.

Of course, at the end he blows it. Big time! At least, from the perspective of antinatal philosophy and concerns. For instance, after going on for some length about the cognitive dissonance which allows otherwise rational people to believe in rather silly things- 'angels, gods, dragons, ghosts, elves, Father Christmas and souls', a state of affairs which he labels an 'asymmetry of proof'- he turns right around and writes this:

In practical terms, though, we accept that something does not exist if we (and all credible witnesses) never observe it. However, the truth of a belief is not necessarily the only good reason for holding that belief. It may be sensible for you to believe in something even though it does not exist, if believing it makes you happy. Thus if the non-existence of immortality, god, human goodness, or the greatness of the English cricket team made you chronically sad, you would be stupid not to continue believing these things, as long as this was psychically possible. Many apparently sensible people have made themselves miserable by only believing in things that were true. How stupid can you get! Indeed, there is evidence that depressed people generally have a more accurate view of the world than happy people (see Kay Jamison's book Exuberance). The implication is that having an accurate view of the world could make you depressed, whereas seeing the world through rose-tinted glasses may help make you happy. But how can you believe in things that are untrue? As the White Queen informed Alice (in Through the Looking Glass), believing impossible things is not itself impossible, it just takes practice.

I probably don't have to tell you that I was EXTREMELY pissed off at this utter piece of crapola once again being passed off as sage philosophical advice, ESPECIALLY as it leads to an unrealistic worldview that justifies bringing new life into this horror of an existence. And there's more! At the very end of the book, Dr. Guy offers a nine-point prescription for our existential ills. Some have to do with practical medical approaches and solutions, and one is a rather benign if new-agey sort of thing about seeing ourselves as 'waves' rather than atoms. For purposes of this review, I'll only mention three of his points here:

1. "Rage, rage against the dying of the light." The beginning of a nice poem by Dylan Thomas, but not very practical, or even consistent with a lot of what Dr. Brown had to say throughout most of the book. Then again, I suppose we can just wish away the need for consistency when it suits us. Wouldn't want to be 'stupid', after all.

8. "Face the fact that we are going to die, and prepare for it." See what I mean? However, further on here the good doctor offers a nod in the direction of legalized euthenasia, so hats off there.

9. "Live life to the full- spread your memes and genes...Leave something really worthwhile behind you- build that dream, write that novel...and have lots of sex." And babies, which is what's obviously being inferred here. Ugh! But with this concept in mind, I thought I might end this review with a bit from the book's opening paragraph:

My grandmother leaned forward and whispered conspiratorially: 'I have been wanting death for the last five years.' It seemed like she was letting me into a profound secret, but I knew she had been telling the same to anyone who would listen for at least the last ten years...I didn't want to know about her relationship with her own death; that was private- something to be faced alone amongst the terrors of the night. But her confession also had an edge of fearless complaint-damning the world and her allotted fate of suffering and boredom.

Seems like rose-colored glasses only work in the dark.
at 10:13 AM 7 comments:

So, I was out and about on my bike this morning, pedaling to one clinic to get some blood samples drawn, then to another across town to pick up my blood pressure meds. Pretty nice ride early on, though it got really friggin' hot later in the day. However, I survived. I can't say the same for a certain cat I passed, though, lying in the road with its head caved in. Hopefully it was sudden and painless, considering the alternative of slow and painful. Either way, the sight was a real punch in the gut of my moral aesthetic sense, not to mention a wet blanket on my general mood.

It's no secret that most people believe life is generally a good deal. And even though their reasons for bringing children into this world are basically selfish ones, they tend to justify their actions by telling themselves that they've really done their kids a favor. On the other hand, they are faced with the problem of dead cats on a daily basis. Dead cats, and canine parvovirus, and sickle cell anemia, and ethnic cleansings, and tsunamis, not to mention big mortgages during economic downturns, and violent husbands, and bitter, vitriolic wives, and let us not forget the biggie- death. We are all future dead cats of one stripe or another, and everyone knows it.

So, how do we deal with this problem of dead cats? Well, most people don't deal with it at all, really. Their stomachs clench. They make a face, and mouth a silent "Ewww!" They tell their children in the back seat "Don't look! Don't look!" or "Play with your Gameboy!" or "Jesus loves the little kitties, and this is how He brings them home." But mostly, they try to sweep it out of their consciousness just as quickly as possible, so that life can go on being good just as before. Because deep down, everybody knows he's a dead cat in the making, and he really doesn't want to think about that. This is why people get so mad at pessimists, and especially at pessimistic antinatalists, because we keep rubbing dead cats in their faces. Nobody likes that. Can't blame them, I suppose.

Anyway, I got to thinking about the people I've read over the years who've actually tried to deal with the problem of dead cats instead of simply ignoring them. And you know what? All their answers that fall short of antinatalism are ABSOLUTELY FUCKING LAME! The theists tell us that all good little cats go to heaven, while the bad little cats are consigned to alleys-turned-gauntlets filled with eternally thrown boots and catcalls, with no clean litter boxes to be found. The Buddhists tell us that cats are illusions, including the pain they feel when the Atman lights their tails on fire. The dumbass existentialists encourage us to fuck the dead cats and pretend their silence is purring acquiescence. Alan Watts, god love him, posited that if life were REALLY so abhorrent that the universe would simply stop producing cats and close the curtain for good. And Will Durant, my favorite synthetic historian, only managed to salvage a shred of optimism by maintaining that even though a cat's life is generally a miserable one, and always ends poorly, each one can find some solace in feeling that he, and he alone, is the King of the cats!

I guess that's enough for meow.

Waitin' for the chariot
To come and take you home
Away from all this busyness
Of rubber tires and chrome
at 6:28 PM 11 comments:

This Be The Verse

They fuck you up, your mum and dad.
They may not mean to, but they do.
They fill you with the faults they had
And add some extra, just for you.
But they were fucked up in their turn
By fools in old-style hats and coats,
Who half the time were soppy-stern
And half at one another’s throats.
Man hands on misery to man.
It deepens like a coastal shelf.
Get out as early as you can,
And don’t have any kids yourself.

"If life's so bad, why don't you just kill yourself?"